SQL is such a bizarre language. It is all backwards. Consider:

What is the logical flow of this statement? If SQL were written in logical-flow order, it might look something like this:

SQL can get really hard to read and understand, really fast. Faster than any other language I can think of, and I’ve been programming in SQL for years. It’s such a weird language. It’s almost declarative, but it’s not. It feels a little pseudo-functional, like LISP, but it’s not. Even XSLT makes more sense than SQL!

I’m not the only one who’s noticed this; see also literate SQL by Markus Winand.

How many fewer bugs would SQL programmers write if they didn’t have to do a mental translation between the Yoda-speak that is SQL and the logical operations the RDBMS executes? I’m not saying they should know the actual implementation, I’m just saying it’d be great if we didn’t obfuscate things more than needed.

But George Lucas wouldn’t like that, and I guess he was on the SQL committee. 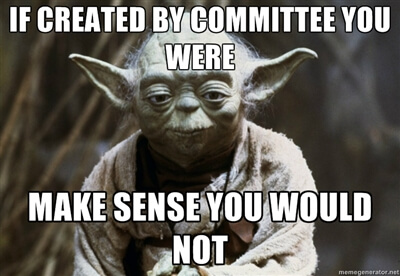