I consider myself a very slow adopter with regard to tablets. I’m too picky. I think the iPad is inconveniently large, and there are a lot of devices that have the same screen size, which eliminated many of the popular ones from my consideration. Many of the devices out there are 7-inch screens, and that’s too small. A while ago I tried using a 7-inch device but after a while I stopped using it. 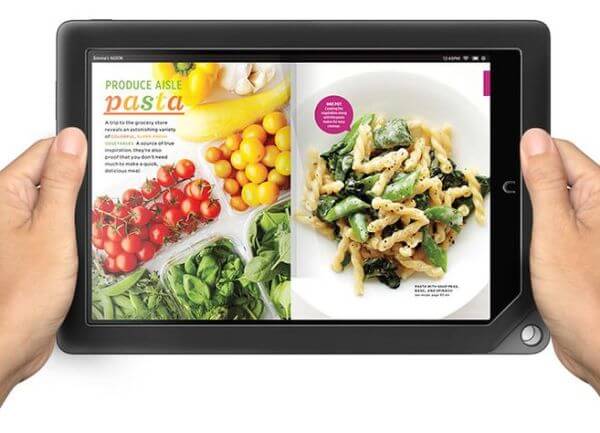 After seeing and holding a lot of tablets, I decided that somewhere between 8 and 9 inches is the right size. It may seem like nitpicking, but the screen size is diagonal. That means that there is a big difference between 8-inch tablets and 9-inch tablets. There’s even more difference when you get out of this range. The area of a 10-inch device’s screen is twice as large as a 7-inch, for example.

I don’t want an iPad Mini even though hardware-wise it seems like the pinnacle of tablet design and is just the right size in my opinion. I think the Apple app ecosystem is too closed and there’s more interesting stuff going on in the Android world. I also think the price is ridiculous.

The other potential contenders in the size range I wanted were also mostly very expensive, such as some of the Samsung devices. I’d love a Google Nexus tablet if it were offered in a size I want.

I’ve been using a Nook Color HD+ for many months now, and unlike my 7-inch Nook, I actually use it on a regular basis.

I bought the Nook HD+ because it seemed like the best deal in midsize tablets. I got it refurbished for just over $100, via the official refurbished reseller on eBay.

I have left the stock operating system on it. I don’t really care enough to customize it. It’s fine as it is. Okay, the home screen is not really laid out the way I would do it, but that’s fine, I don’t mind. It also comes with some Nook versions of some apps. These are fine too. Some of the games are even fun. Some of the apps have upgraded themselves with newer versions from the Google Play store, and it always notifies me about this. I would also like to be able to enable full-device encryption, but I can’t (so I don’t take it out of the house). Whatever—these are minor things. Mostly, it’s just fine.

The size, weight, and battery life are excellent. It is on the large end of the scale but it’s nice and light, and lasts a long time on battery power. I remember one of the reasons I didn’t end up using my smaller Nook previously was battery life. It seemed like everytime I wanted to pick it up and use it, the battery was dead, so I never could use it. That’s not the case with this newer device.

The screen is not as gorgeous as the reviews claim. Maybe it’s because mine is refurbished, but there’s a noticeable brightness gradient at one edge. I don’t care, but you might. Otherwise, I agree, it’s a nice screen. Very high-res, good refresh rate. Doesn’t flicker like the older one I had. This is important if you’ll read on the device. Even if you don’t notice micro-flickering, your eyes will be strained as they move back and forth across the device. Quick test: move your hand between your eyes and the screen while you keep your eyes still. Does the edge of your hand look jagged, with a strobing effect? Don’t buy devices that do that.

The device is also not overly powerful. But I don’t need a lot of power. I don’t care that it takes a second to load an app.

I’ve had my Nook HD+ 9-inch tablet for 4 months today and I’m still enjoying and using it regularly.