I used Google Reader since time out of mind, but of course by now you know it was discontinued a while ago. I still live and breathe RSS feeds, and I really don’t pay much attention to social media, news sites, or the like of Hacker News and Slashdot. I like the flexibility and unhurried pace of subscribing to updates from specific individuals and companies.

At first, I didn’t see a reader that offered the experience I was looking for: a GMail-like user interface with feeds clustered together in categories, navigable with keystrokes. Importantly, some subtle features such as marking an item unread are a key part of my usage.

I tried Feedly first, but it had some bugs that drove me away. Recall that this was a couple of years ago; this is not a criticism of Feedly’s state of development now. One of the most important ones was some kind of strange browser interaction that caused items to be marked as read simply by moving the mouse over the title.

One of my colleagues suggested Digg Reader at the time. I think the RSS reader in Digg is probably one of its best kept secrets. It was almost a direct copy of the Google Reader user interface’s most basic and important features.

I’ve been using Digg Reader since then, and am very happy with it. Nonetheless, I recently took another look at Feedly, and at first glance, I’m even happier with it than with Digg Reader. Both products support import and export of OPML, so it’s easy to migrate between them and I feel no particular switching cost or loyalty. I’ll go where there’s the best UI and functionality.

What’s better about Feedly than Digg Reader? Well, for my purposes, they both have all the same solid feature set I was looking for, but Feedly has a slightly nicer design in my opinion, and offers a couple little niceties. I’ll get to that in a moment.

Here’s a screenshot of each: 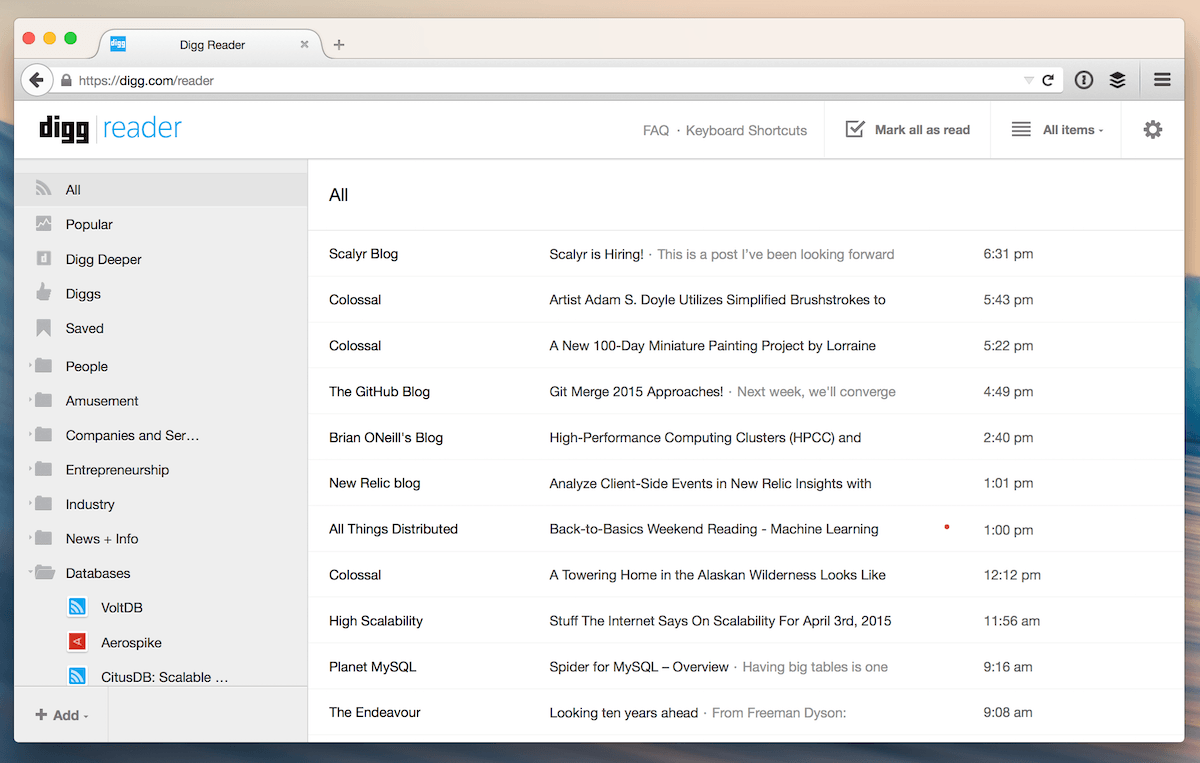 What made me curious to investigate Feedly again after all this time? One of the things that changed for me was using my Barnes and Noble Nook HD+. I use this tablet regularly now, almost always at least once a day, and a key thing I do on it is catch up on the latest feed updates.

Digg Reader and Feedly both have Android apps, and both work very similarly and intuitively from my point of view. But there were a few small things that didn’t feel completely finished in Digg Reader. One of them is the lack of a way to mark an item as unread in Digg Reader.

I’ve just tried out the Feedly app, and I believe after using it for a bit that it has a nicer design, too. It’s a bit hard to pinpoint, as good design always is, but instead of feeling like I’m reading through content from programmers who don’t use CSS, Feedly formats the content and arranges it in a way that makes it feel like I’m reading a curated magazine. There are different layouts of the “home” view, and they’re easy to switch between too. I like all of them, to tell the truth.

Although if I had one suggestion for the Feedly team, it would probably be… imitate the Android GMail app’s layout and UI!

Regardless, I might take a look at the benefits of paying Feedly. Last I looked at Digg Reader, they were still not taking any payments. It’s odd in some ways, but I feel better about products I can pay for. If it’s free, I feel unsure it’ll be there tomorrow.

Here are screenshots of both UIs on my Nook, followed by a landscape-mode one of Feedly in magazine layout. In non-magazine layout, I actually prefer Digg Reader’s UI here: 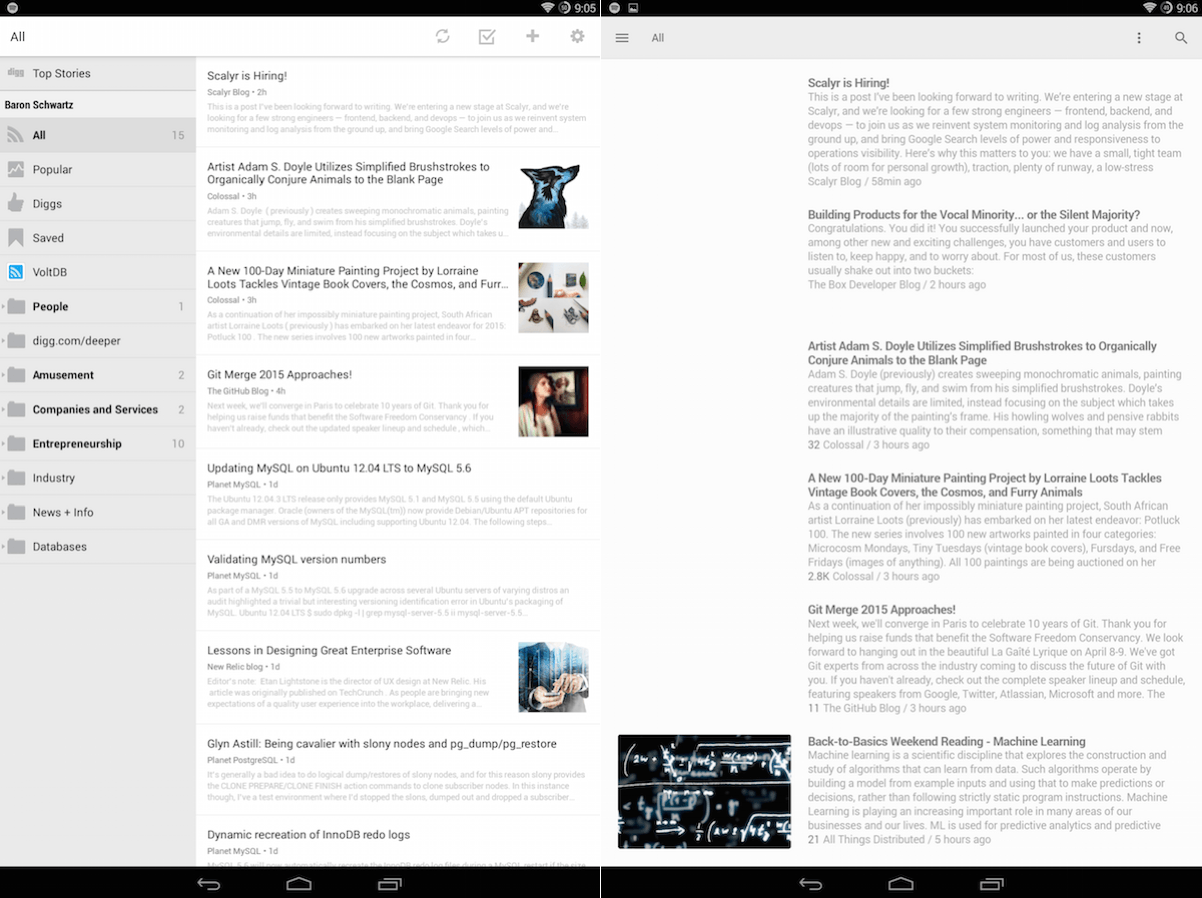 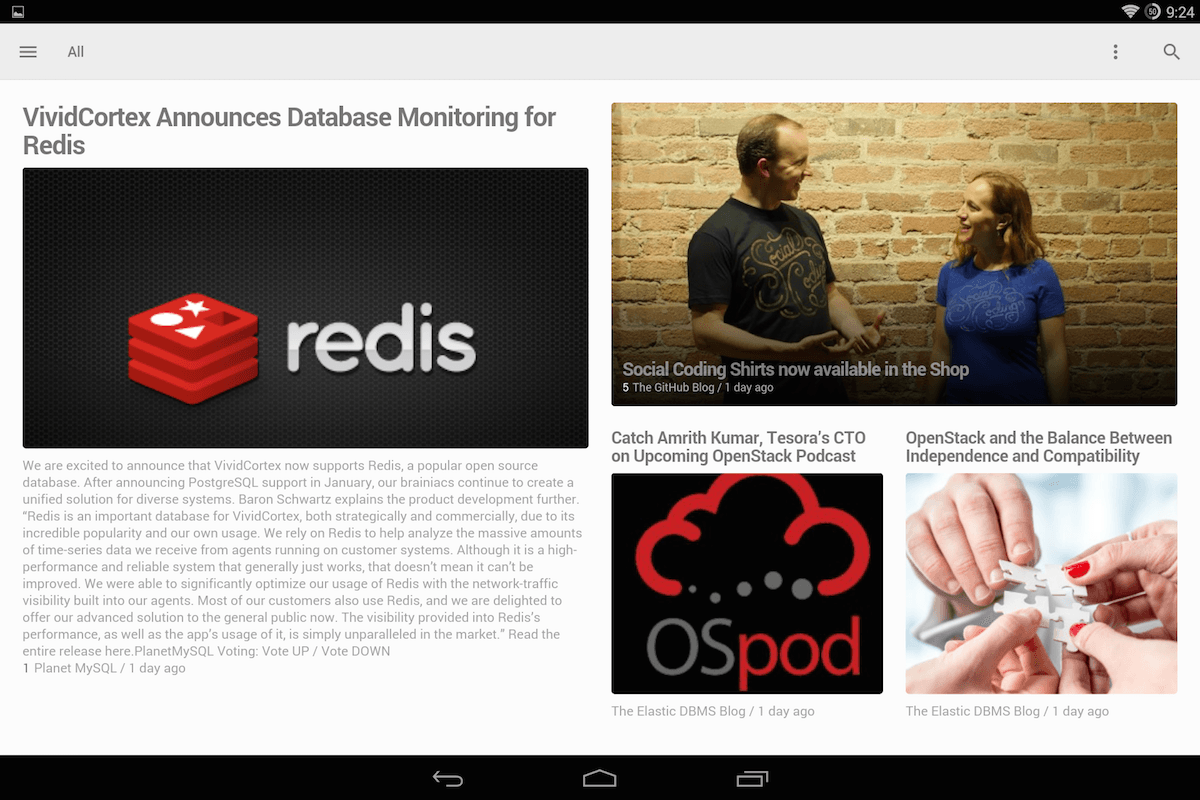