After thinking about smart watches, activity trackers, and similar devices for a while, I bought a Withings Steel HR. My goal was to find a traditional stylish-looking watch with long battery life, heart rate tracking, sleep tracking, and activity tracking. Here’s my experience thus far (updated after a year; scroll down).

TL;DR: Using the Withings Steel HR has changed the way I use my smartphone. I love how much less distracted I am. I’m pretty happy with the health tracking features, and I like the traditional watch styling and long battery life.

In the last few years I’ve kept an interested eye on the explosion of health- and fitness-tracking devices, considering whether it was time to take the plunge and get one. Broadly speaking, there are a few categories of devices on the market, each appealing to a different user for various reasons. Here’s my summary:

There are many more choices than these, but those represent some of the leaders in the field. For more detail, read on.

Today’s smartwatches have many features that go far beyond watch functionality. You can make and receive calls and texts, respond to emails, dismiss calendar alarms, get navigation guidance, and much more. In addition to features you’re used to getting from a smartphone, many devices offer a broad range of features to measure your activity and vital signs: heart rate tracking, step counting, GPS tracking for runs and walks, sleep tracking, and so on.

I was looking for some of what I consider to be the most important features of these, without sacrificing the form factor and style of an analog watch. The Withings Steel HR, a new offering on the market, was my choice because as far as I could tell, it was the only analog watch that tracks heart rate, steps, and sleep, and has a good battery life. I pre-ordered it before it was available and have had it for a couple of months now. I’ll review it in detail below.

I also have some experience with friends who’ve had some of these devices. As with everything, these are intensely personal choices and it’s best to go to a store where you can see and try as may of the models as possible. For example, FitBit is easily one of the leaders in the field of wearables, and makes fantastic products. But are they right for me? One of my friends doesn’t like her FitBit because of the flickering lights she sees at night in bed, which I know would bother me. I was told the FitBit Charge doesn’t truly detect your sleep automatically, though I’m not sure of that, and it may not be waterproof. And several friends complained about the difficulty of using all its many features. As for me, I simply don’t care for the aesthetics of the FitBit, nor the way it feels on my wrist; it has a rigid band that I dislike.

Here’s a summary of some wearables and their features, to give a sense of the market. This is not exhaustive and may not be current or accurate. Note that I’m not an Android user and there are far too many options in the Android market to summarize here. I’m also not listing Jawbone; I couldn’t find anyone who was willing to recommend a Jawbone.

Each of these makes and models typically has options or related products that have more or less functionality. For example, Withings offers an Activite Pop that is simpler than the Steel HR, and doesn’t track heart rate. But its battery lasts 8 months instead of 25 days. Misfit has a more fully-featured watch, but it’s not analog. And so on.

My favorite watch was the Withings Steel HR. I’m a traditional, simplistic watch guy; my analog watch is a Timex Weekender. I wanted a minimalistic analog watch with long battery life and the following features if possible:

One of the reasons I wanted a minimalistic product, with fewer smartphone features and more activity-tracking features, is because my experience is a small device with a lot of features is hard to use. I’d rather have a few easy-to-use features than a lot. This biased me away from devices like the Garmin Forerunner 235 and Ticwatch.

The Withings Steel HR tracks steps continuously, and heart rate every few minutes instead of continuously, but has an exercise mode (just long-press the button on the side to activate) that tracks continuously. It tracks sleep automatically, detecting when you’re in bed and light/deep sleep. It’s able to vibrate on your wrist when you get a text message, call, or calendar notification, and displays the caller ID or similar. And it can act as an alarm clock, vibrating to wake you.

It also auto-detects activities and the companion app lets you set goals and review your health statistics.

It’s mostly an analog watch in appearance, although it has a notification area where caller ID and the like appear, and a goal tracker to show how much of your daily step tracking goal you’ve achieved. 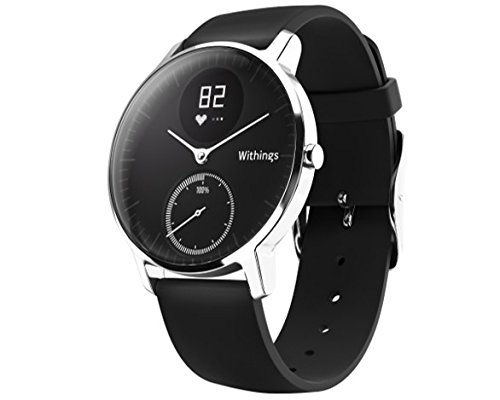 I got the black 36mm model. I like the styling. I have found it functional, and I appreciate the long battery life. The band is very comfortable and flexible. I wear my Withings 24x7, even in the shower. Here’s a breakdown of how well things work:

All in all, I’m happy with it. And I have to say, I’ve changed my mind about getting notifications. My phone/text stays out of sight more now, and isn’t something I always have in front of me. And I have notification sounds turned to very low volume now, so calls and texts are unobtrusive. I don’t miss calls or texts as much anymore because of loud ambient noise or whatever. In general, I notice calls and texts more reliably now, and people around me don’t, and I fuss with my phone less. It’s an unexpected win for me.

Since I bought my Withings Steel HR a year ago, a few things have happened, and of course I’ve booked a year of experience with the device. Here’s my experience in a nutshell:

Above all, what I’ve learned from the experience is that I don’t really want my watch to do fitness tracking as I first thought. Instead, the ability to interact with a watch instead of with my phone is much more valuable. I’d like slightly more power here: I’d like to see the text of my notification, instead of just that John sent me a text message. And I’d like notifications beyond just text, calendar, and calls. But at least on iOS, no other apps are supported.

If I were to use something else instead, it might be one of the following:

It’s worth noting that the space is fast-moving. While I was biding my time, trying to decide what I wanted, at least three watch and wearable companies were acquired or went out of business, and several new options became available. Here are some of them:

Hybrid Watches Without Emphasis On Fitness

As I mentioned above, after a year using the Withings/Nokia watch, I’ve changed my mind and decided that I’d like a watch that prioritizes smartphone interactions, rather than fitness tracking. Here are some I’m considering:

What are your thoughts and experiences using any of these devices?