I bought pairs of Bose QuietComfort 35 Series II and Sennheiser PXC-550 wireless noise cancelling headphones, and compared their performance. Both are good headphones, but the Bose is the clear winner in nearly every category. The Bose headphones offer significantly better comfort, ease of use, sound quality, and noise cancelling. And both are priced at $350, so the choice is easy.

I’ve actually owned the Sennheisers for quite a while, so I’m very familiar with them. (I’ve been a Sennheiser fan and have owned many pairs of Sennheisers, as you’ll find if you search this website). I also used to own a pair of an older generation of Bose noise cancelling headphones, so I bought their latest to give it a thorough evaluation and side-by-side comparison. 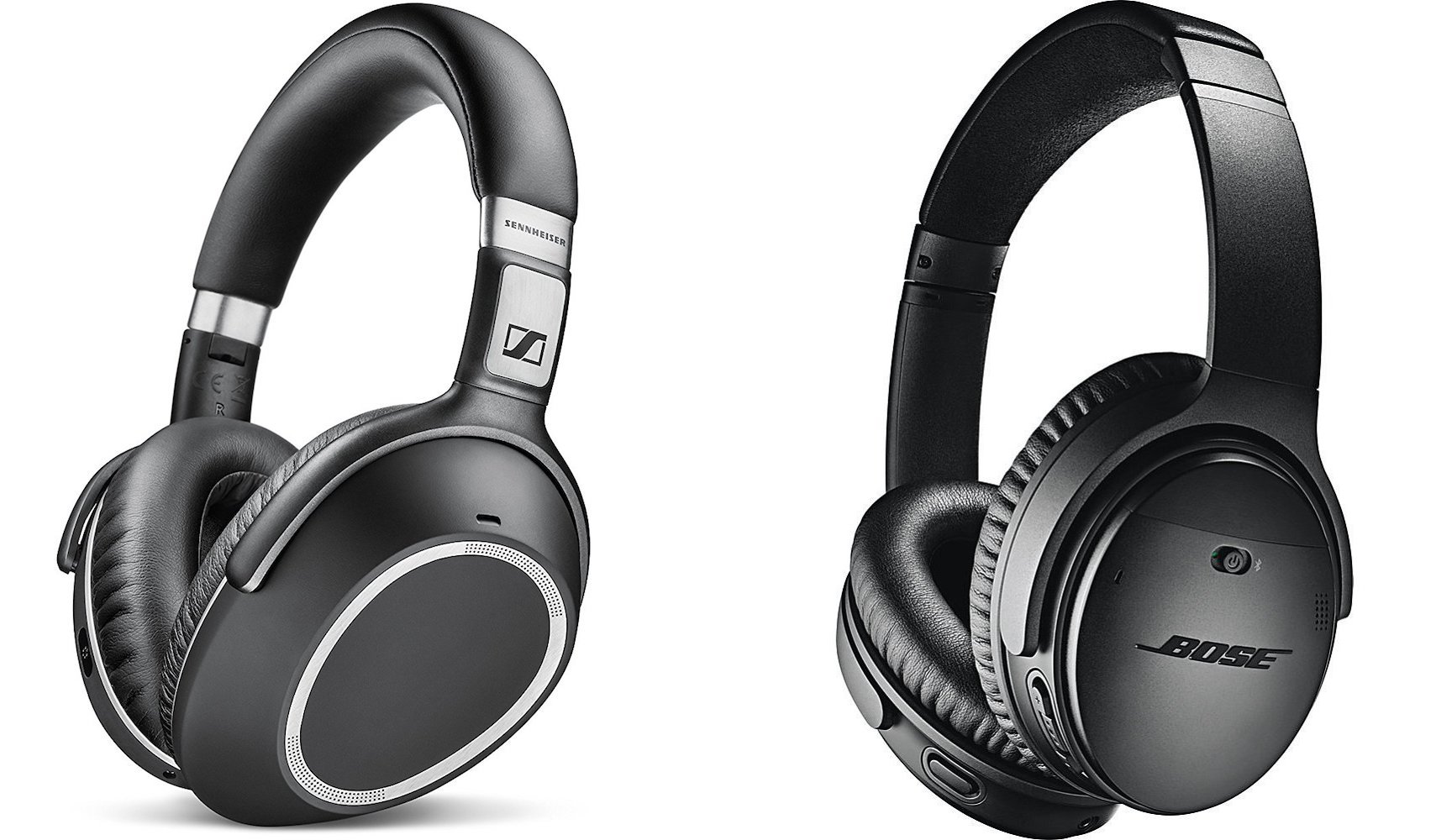 I listened to these headphones several hours daily for a week, including on cross-country flights. I evaluated them extensively in many different environments, with and without music, and with many combinations of settings.

Both headphones offer substantially similar features: Bluetooth connection, built-in microphones, music controls, and more. In the following sections I will summarize my opinion of them.

The Bose noise cancelling is noticeably better than the Sennheiser. In a busy airport terminal, with a television blaring overhead, the Bose cut out the television completely and almost completely silenced the terminal announcements. Voices of people speaking around me were nearly inaudible. The Sennheiser eliminated a lot of background murmur, but I could still hear and understand the television.

On the plane, the preflight announcements were nearly inaudible, and completely unintelligible, with the Bose. The same is not true of the Sennheiser. The Bose eliminated the noise of the jet engines and rushing air; the Sennheiser simply reduced it.

The Sennheiser also react to air blowing from the overhead vent, producing noises in response. The Bose stays silent, even when I deliberately aimed the air vent on them and rotated my head to catch the stream of air at different angles.

I remembered my previous pair of Bose as having strong “eardrum suck” when turning on the noise cancelling. It’s a sensation like diving underwater, and I find it mildly uncomfortable. The new Bose have almost none of that; the Sennheiser have more of it than the Bose do. My previous Bose headphones also had a way of letting sound leak in when I moved my head or jaw; the new generation doesn’t have that problem.

In summary, the Bose’s noise cancellation is dramatically better than the Sennheiser, resulting in near-total silence that reduces stress and allows music to come through clearly—which is my next topic.

I performed extensive subjective listening tests. The Bose delivers obviously superior sound quality to the Sennheiser. I believe it is mostly because of their signal processing, not fully due to the physical characteristics of the speakers or cups.

My first impression of the Bose, not comparing to anything but just listening, was “this music is enhanced digitally to sound better, and is slightly bass-heavy.” I followed up that first impression by listening to a variety of music on both headphones in many different environments, with and without noise cancelling, and even with a physical cable and Bluetooth turned off.

First, in a noisy listening environment like an airplane, the Bose is much better-sounding because it nearly eliminates that noise, letting the music shine through. That aside, though, its audio quality is still much better than the Sennheiser.

I continued listening in the plane with noise cancellation enabled at max.

The biggest difference beyond the noise cancelling is the treatment of the midrange. The Sennheiser seems to have some midrange and upper-midrange resonances in the physical earcups, which causes a lot of problems for vocals and vocal-like instruments. Listening to Sleepless by Jann Arden, the Sennheiser made her sound congested, like she was suffering from allergies. This effect is not subtle: the upper midrange (perhaps 400-800Hz) is harsh and conflicted. After many careful listenings, my only complaint about the way Bose renders Jann Arden’s voice is that it might give her a faint hint of a lisp. Both headphones handled the triangles and cymbals in the chorus quite well; I’ve found these very complex passages to be highly revealing of audio compression and processing algorithms.

In Eric Johnson’s Strategem, the Bose reproduces Eric’s guitar with fidelity. His signature tones come through raw and soulful. The Sennheiser suffers from the same resonance as before, but treats Chris Maresh’s bass guitar more respectfully, where the Bose makes the upper bass sound a little bit antiseptic.

In Muse’s Starlight, both headphones crank out the bass and drums with appropriate aggressiveness and crunch, but the Sennheiser again gives Matt Bellamy clogged sinuses. This theme repeats again and again, across every type of music, in every noise cancelling setting, in quiet and noisy environments, with or without Bluetooth. The Sennheiser just doesn’t do a great job at this crucial frequency range.

On the bass end, there was a decent back-and-forth between the headphones. Sometimes the Bose did a better job, sometimes the Sennheiser carried the contest. My first impression of the Bose was that of slightly more muscular and smooth bass, as I mentioned previously. The Bose extends the frequency response a few notes lower, giving it more authority, though this isn’t pronounced. At times, this felt artificially enhanced, but at other times it was what the music needed. The Sennheiser, for example, lacked a bit of presence in the bass on Live’s In The Distance, where the Bose gave it a better treatment. And the Sennheiser delivered the bass on that song a bit raggedly, with some catches and glitches; I think this was due to the noise cancellation working against the cabin noise.

Turning to Mark Knopfler’s album Sailing To Philadelphia, on the title track, the Bose renders that faint delicious rasp that forms the foundation of Mark Knopfler’s supple voice, but the Sennheiser missed it, making him sound like less of a baritone altogether. The Bose was much more faithful in the upper vocal registers, blending together the layered instruments and both Mark’s and James Taylor’s guest vocals, harmonizing them well. The Sennheiser turned the harmonies harsh, and handled Mark’s guitar carelessly.

In Roseanne Cash’s Tell Heaven, the mix is heavy on thumping acoustic guitar, bass, and drums. There’s some mud in the mix itself, but the Bose reproduces it as less of a peg-legged race on a wooden deck. On the other hand, the Bose adds a subtle veiling effect to Roseanne’s voice on this song, as though she were not in the room, but singing through a door with a hanging cloth. Perhaps I was only able to hear this because the Bose reduced the cabin noise so close to silence; in any case, the Sennheiser again turned the vocals nasal and cloudy.

Patrick Ball’s harp recordings are a great test of realism because there’s zero processing of the extraordinarily complex sonic signature of the brass-strung harp with its long sustained notes, subtle fingerings, and damping. The Bose did a great job on Passing Thus Alone, rendering the low notes cleanly and the sweet woody midrange and bell-like high end with clarity. The Sennheiser again gives a harsh, nasal rendition, and fails to bring out the tonality of the low bass strings.

Having listened through a coast-to-coast flight, I hopped off the plane and spent an evening at my hotel in relative silence, where I connected the headphones to my laptop via Bluetooth and wire. I tried all the noise cancelling settings: high, low, and off. And I tried turning off the headphones and using them in passive mode, too.

In the silence of a quiet room, I immediately noticed that simply putting the headphones on my head, turned off and with no music playing, was different. The Sennheiser are little echo chambers, like holding a seashell to your ear to hear the “ocean.” My breathing echoed noisily back from the cups. In contrast, the Bose sealed the outside off.

With noise cancelling off, I listened to Renato Braz and the Paul Winter Consort’s recording of Anabela. The Bose is vastly superior: Paul Winter’s soprano sax is sweet and liquid, natural-sounding. The Sennheiser turns the same tones into a clashing puddle of resonances. Renato’s voice itself comes through clearly with the Bose, its steady frailty on full display, and the double bass’s woodiness is transparent and the soundstage is nearly palpable. The Sennheiser adds a hazy note to the bass, giving it a cool and distant sheen and sapping some of its character. On the song Feitiço da Vila, the bass becomes challenging for both headphones, and I didn’t like the rendition I got from either one: muddy and boomy, though the Sennheiser did a more credible job on this song’s bass. (Back at home, my ELAC speakers did a better job with this track, and also revealed why the headphones struggled: the bass is oddly percussive and subdued at the same time, a difficult combination to reproduce.)

Next I disabled Bluetooth, turned the power off completely, and connected the ‘phones via a cable to my MacBook Pro, and listened to Dansons La Gigue from Patricia Barber’s Verse. Turning off Bose’s circuitry altogether helped highlight that it, too, has a resonant peak in the midrange. Although it’s not as bad as the Sennheiser, it nonetheless made clear that my very first impression was accurate: Bose is adding some sound processing even when the noise cancellation is disabled. To be fair, it mostly works as intended: it compensates for the acoustic characteristics of the headphones and delivers a more natural sound.

But the Bose’s sound is not fully transparent and neutral, and I think it goes beyond merely equalizing the frequency response. I can’t prove it, but I think it’s ever so slightly buffed and shined to make it glow a little and sound a little sweeter. The cymbals in the Patricia Barber album got a tiny bit of lisp again, as I noted when I was listening to Jann Arden. The “Josh Groban” effect, if you will: probably designed to make listening more enjoyable for the average person. I remember my old pair of Bose being pretty fatiguing after a few hours, and it seems Bose has figured out how to make the sound a little more silky without being tiring or obviously artificial.

Buy the Bose QuietComfort 35. (You’re welcome.) It has dramatically better sound, is easier to pack, more comfortable, and cancels much more noise.