On August 11 and 12, 2017, hundreds of white supremacists traveled to my hometown of Charlottesville, Virginia, ostensibly to protest the planned removal of Confederate memorials. They assaulted, injured, and killed people.

Many people don’t know even the outlines of what happened, and have asked me to describe it to them. I’ve had trouble finding a concise, comprehensive story online. Most news stories are either summarized or focus on only a single incident during the rally, giving no sense of what happened overall. This post is a compilation of some of the major events.

Before you continue, please be aware that this post links to and contains graphic, disturbing images and video.

Charlottesville endured a series of protests and rallies during 2017, notably one led by Richard Spencer on May 11 and a KKK rally on July 8. Most involved memorials to Confederate leaders that the city voted to remove from its parks (although they have not yet been removed). Jason Kessler, a local “alt-right” activist, initiated planning for the August 12 event. Styled as a “Unite The Right” rally, it attracted support and participation from many hate groups nationwide, including white nationalist and fascist groups, neo-Nazis, the KKK, and neo-Confederates.

A lot happened in the months leading up to the afternoon of August 12. There were signs of planned violence, and everything escalated in the few days prior to the 12th. The city council tried to move the event out of the downtown area to a safer venue, away from densely populated areas and businesses. But civil rights groups defended the organizers, and a judge forced the city to leave the event at Emancipation Park.

The hate groups who came to Charlottesville arrived early and became violent immediately. On Friday night, hundreds of people gathered at a UVA sports field without a permit, lit torches, and marched to the historic heart of the University. They chanted Nazi and anti-Semitic slogans as they marched: “blood and soil!” “Jews will not replace us!” They were exultant, hateful, and without fear of reprisal.

They surrounded a group of students who ringed the statue of Thomas Jefferson that stands in front of the iconic Rotunda, where they chanted, threw torches, and gave Nazi salutes. They struck at least one person with a torch; threw fuel on some; maced and pepper sprayed others. They threw some people to the ground and injured several, and one person suffered a stroke caused by trauma to the neck. Police came to the scene after the marchers left, and dispersed the few people that remained—mostly students. A UVA student group live-streamed the scene at the statue.

On Saturday morning, violence began well before the scheduled 2:00pm rally. There were marches and violent clashes over several city blocks and parks separated by a few miles of city streets, from McIntire Park to UVA to the central downtown area. 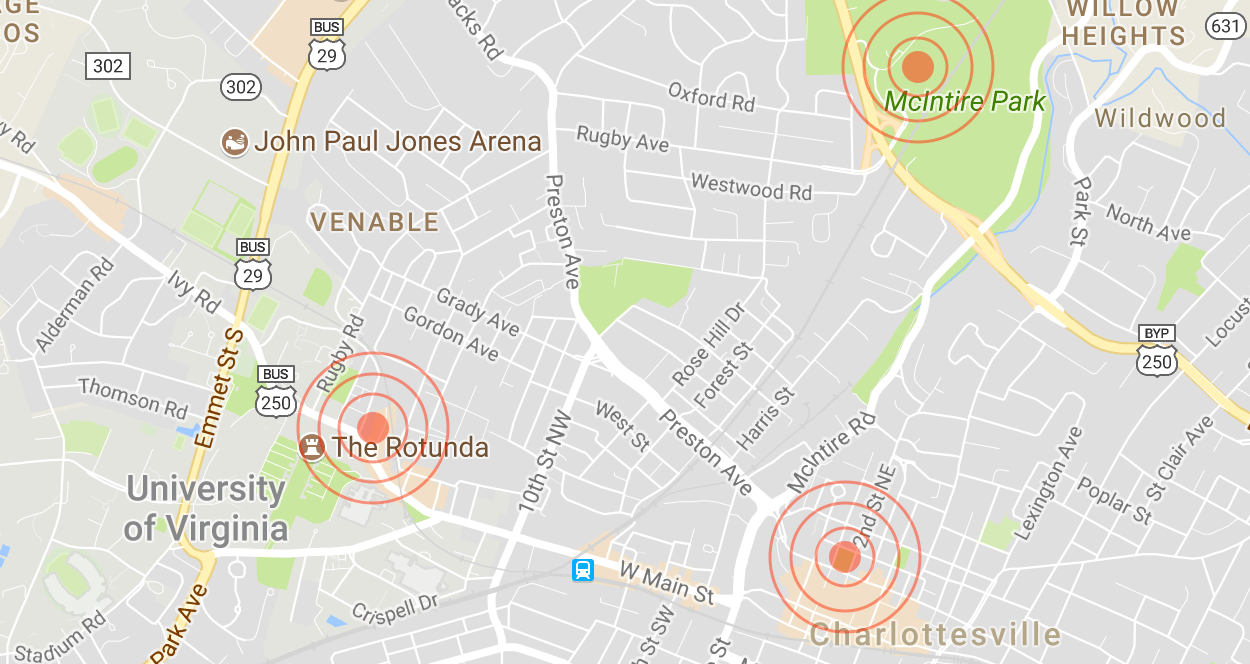 The rally participants were heavily armed with sticks, pistols, chemical weapons, assault rifles, bricks, and automatic weapons. Many carried shields, wore helmets and full body armor, and some were difficult to distinguish from riot police. Some “antifa” counter-protestors were also armed. The situation was far from an exercise of First Amendment free speech rights.

Some of the first violent clashes took place as the alt-right groups arrived and sought to assemble at Emancipation Park, the site of the Robert E. Lee statue.

Trump just said antifa started fight on sat by "charging in swinging clubs" at racists. Video shows the opposite pic.twitter.com/YmLpd5Ow4J

Witnesses from all groups, including the fascists, reported that the police and city response was passive.

At 11:28 am on Saturday morning, the governor declared a state of emergency. The police used loudspeakers to announce an unlawful assembly and threatened arrests if the marchers didn’t disperse. But with police standing inactive and no physical separation between protestors and counter-protestors, the marchers seemed to act with impunity after they were forced out of the park itself. And there were many hundreds of people in the area, many of them far from where their vehicles were parked.

It’s not clear what the authorities thought could happen next, but it’s clear that the marchers didn’t all try to simply leave. Many of them formed crowds and walked from place to place, chanting and trying to provoke fights. The violence escalated. There were multiple incidents of pepper-spraying, punching, bottle-throwing, shooting, urine tossing, and so on.

Here are a few of the more shocking incidents.

A group of white supremacists singled out Deandre Harris, a local schoolteacher, and called for his assault and death. He attempted to flee them, but they knocked him to the ground just inside a parking garage and beat him with lumber and poles.

Fight broke out. Nazis beat black kid w/sticks at end. I kick one in back 2 help & he runs after me. Kid is safe but bloody #Charlottesville pic.twitter.com/kr11a8zQ0K

The attackers, some of whom brandished firearms while others seemed to stand guard (see the man in the far left of the photo below), fled after a group of people rushed to Harris’s aid. Harris and others huddled in the stairwell and waited for medical help that never came. (Another perspective is visible at 0:26 in this video.)

Richard Wilson Preston, a KKK member, called someone a racial epithet and fired a gun towards a crowd of people, then walked away past the police, who didn’t move or respond. You can see the video here. The police are wearing neon yellow vests, standing in a line near the brick building at the 30-second mark in the video.

Preston is visible in many videos of the event, repeatedly grasping and brandishing his firearm during the course of the day and threatening people with it.

There were many more brawls and clashes. Here’s one scene near Emancipation Park, where Robert E. Lee’s statue is located. The man who shouts “follow me!” is convicted domestic terrorist Michael Tubbs. You saw him in videos and photos I embedded above, too.

Similar incidences of violence continued to happen, and some of the people seemed to have come specifically to find people to attack. Dennis Mothersbaugh was one of them.

The violence culminated in the afternoon when James Alex Fields Jr. drove his car down 4th Street and accelerated into a crowd of counter-protestors, injuring dozens and killing Heather Heyer. There is footage of this incident from multiple angles: overhead, street level from behind the car, overhead again, and finally a very long live-streamed video from a journalist who ended up in the crowd that the car rammed into. If you want to watch the last one, you can start at 65:00, and when the video player shows -14:10 remaining you’ll hear the sounds of the car striking people. 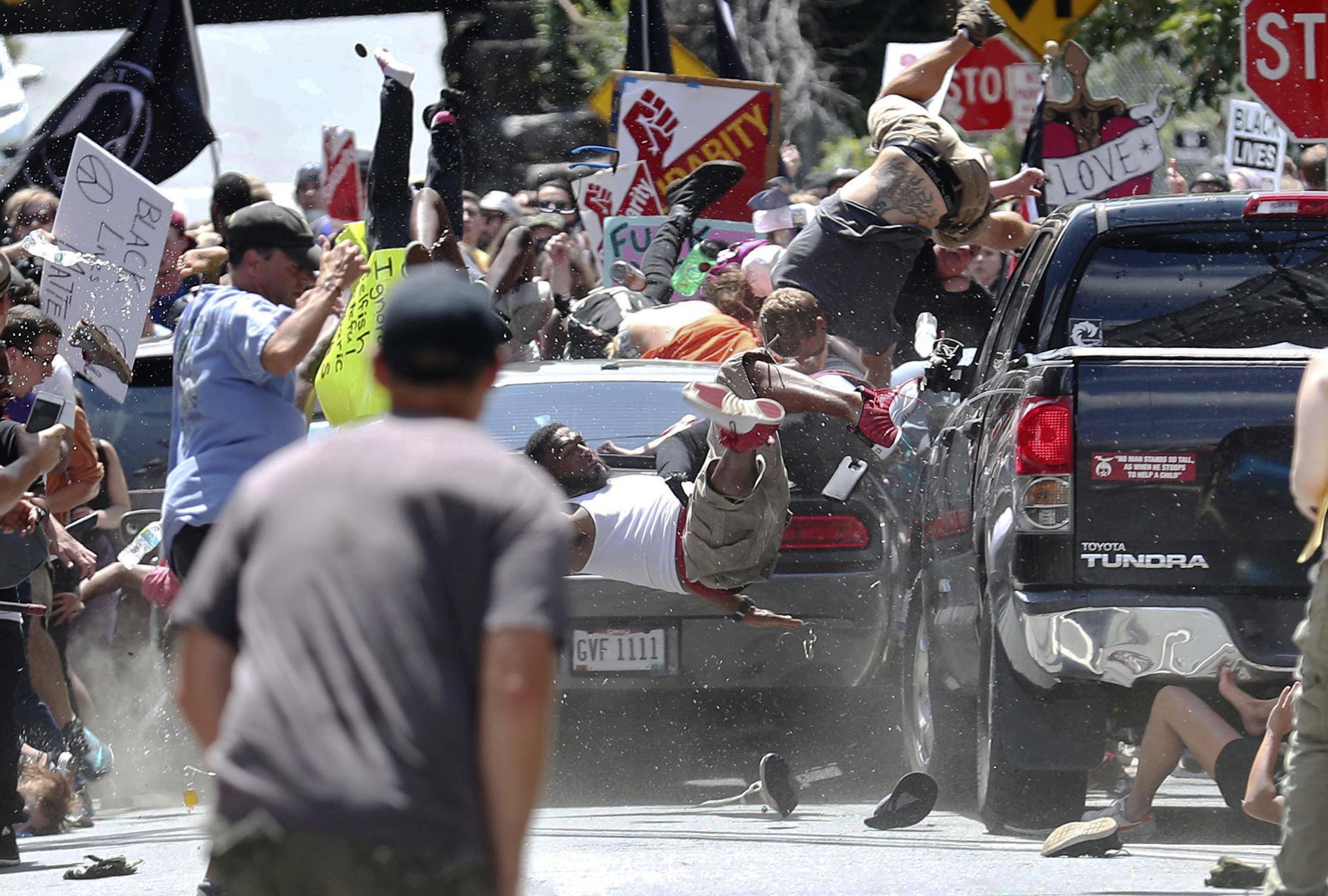 There was much more. Among other incidents, a state police helicopter crashed nearby while monitoring the situation, killing both officers aboard. And tension ran high for many days afterwards as follow-on incidents rattled the city. In one incident, the KKK celebrated President Trump’s refusal to condemn hate groups by announcing they’d burn a cross in front of a bagel bakery. In another, a Confederate romanticizer named Allen Armentrout saluted and stood guard in uniform for hours at Lee’s statue, holding a Confederate flag while wearing an assault rifle and a pistol.

The next weekend there was a counter-rally, organized person-to-person in private. Thousands of people gathered peacefully at the same field where the neo-Nazis assembled. They lit candles and walked the same path to the center of UVA, where they sang songs of peace and justice.

When the fascists left Charlottesville, they were angry that the police and city hadn’t protected them so they could hold their rally as planned, and they blamed the disruption on counter-protestors (“antifa”). They vowed that they’d return, and they have. On the evening of Saturday, October 7, Richard Spencer and 40-50 other white supremacists arrived unannounced in a tour bus and repeated the tiki-torch chanting routine at the Lee statue, which has been shrouded in black cloth since shortly after Heather Heyer’s death.

The police were at the gathering, which they did not deem illegal because the park was open and there were not more than 50 people present. The ralliers chanted “we will be back,” and then the police escorted the people away without incident. Meanwhile, about 30 students and faculty assembled at UVA in front of the president’s residence to counter-protest, and police declared that an illegal assembly. It is also worth noting that NBC29, which broke the story that evening, called the downtown group “white activists” at first, and only later updated the headline to call them “white nationalists” (note the story’s URL).

I encourage you to watch video of what happened. In addition to the videos I’ve embedded above, you can get a good sense of the mayhem and panic of the weekend’s events by watching some short montages assembled by The New York Times:

The NYT summaries are only a couple of minutes long, so I suggest you also watch the following in-depth report from VICE news correspondent Elle Reeve. You’ll not only see footage of the events, but she interviewed the white supremacists. You’ll hear them advocate for their own beliefs, and justify and defend why they came to Charlottesville.

And this compilation of video from News2Share provides a good overview as well:

You can also browse Getty’s photos of the event.

I have many more thoughts about what happened in Charlottesville on August 11 and 12 and the days that followed. I will stop at this for now, but I will leave you with this closing thought:

This rally was not about free speech. It was a planned race riot, a show of force designed to intimidate those who object to white supremacy and racism.