Every hotel I stay at professes a commitment to the environment. There’s always a card telling me to leave my towels on the floor if I want new linens, and hang them up to reuse them. The card urges me to reuse my towels because washing linens consumes water, detergent, and so on. But I don’t remember the last time housekeeping actually respected my wishes when I hung up my towels. Why not?

Many companies’ Core Values feel similar to me, like leadership theater. What is the purpose of espousing values that you don’t live? Why would a company go to the trouble of listing Core Values if they’re just HR feel-good decorations that nobody takes seriously? What functions do these so-called Core Values serve, and is there a better alternative? What are “values,” anyway? What do they even mean?

If you do a little looking, you might be surprised how hard it is to find anyone who has a simple, clear answer to this question. For example, Netflix’s vaunted “culture deck” had a slide saying “Values are what we value.” With respect to whoever wrote it, this didn’t answer the question, it avoided it. (What does it mean to “value” something?)

Statements of values are an artifact of leadership, and leaders need to be absolutely clear on the moral implications. They’re entrusted with too much power and authority to do otherwise.

My definition: values articulate expectations about desired and undesired behavior that sets a group apart from the overall population and describes their beliefs about right and wrong.

Values serve to communicate essential truths about a group of people: who belongs here and who doesn’t? What behaviors do we reward or correct? How do we make decisions? What is right and wrong?

Values are irreplaceable for these purposes, but they’re too often crowded out by a substitute. I call it “bad values.” The difference between good values and bad values is one of kind, not of degree. Bad values aren’t merely good values done unskillfully, but another substance entirely, which has the appearance of values but really isn’t the same thing at all.

Good values are lived, not just stated. Ideally, they’re readily observable, but they also need to be stated so they’re explicit. They have teeth. You can tell what’s really valued by watching how people make decisions, what gets rewarded, what gets punished or discouraged.

Good values signal and encode norms. They describe how the group actually behaves, not what feels good to believe. They are not rules, but they are guiding principles that help people understand how to make decisions. This helps create autonomy by dispersing commander’s intent to the edges, encouraging alignment and consistency while avoiding constant escalation of decisions.

Good values differentiate by going beyond the baseline. Good values state what is necessary, not what is merely sufficient. Good values aren’t things like “honesty,” which is a baseline expectation. There’s no point in listing a “core value” that’s a low bar any functioning member of society should clear. This is not to say that good values are exclusionary, or that they need to be completely unique, but they should say what’s particular about a group that isn’t otherwise to be taken for granted about any group.

Good values don’t change much or often, if at all. They may need to be refined as time passes and the group understands them with more nuance, but at core, they don’t change. If a group’s statement of core values changes significantly, you can safely assume that either the old or new values aren’t good values.

Bad values, as I mentioned above, aren’t merely values that are done badly. They’re a kind of antimatter, which is unfortunately all-too-common in corporations and prevents good values from being established. It’s part of the trend in pseudo-leadership literature to create a paint-by-numbers recipe for leadership and culture. “Write down your vision, mission, and core values!” This is how you get Enron’s core values: Respect, Integrity, Communication, and Excellence.

Bad values are feel-good statements of lofty things that someone frames and hangs in the lobby. Enron’s were engraved in the impressive entryway to their grandiose building. 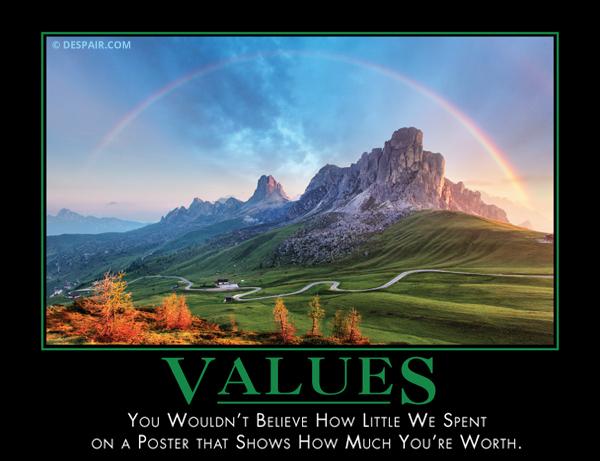 Bad values come from bad reasons for having values:

Bad values stop at words like “believe” and “feel.” The word “value” itself belongs to the same category. It’s an easy cop-out, because beliefs and feelings are intangible, untestable, and personal. I have no ability or right to tell another person what to believe or feel, and in many cases it’s against the law to take any action against a person based on their beliefs, which makes bad values utterly unenforceable. Some companies seem to want bad values for this very reason, because it lets them hide behind their values while being unaccountable for violations.

Bad values often have a smell, because they are dressed up in exaggerated language like “committed.” The hotel is “committed” to protecting the environment—really? Words like “committed” are testable. If a company is committed to something, their very existence depends upon that thing; they are past the point of no return. Watering down strong language in this way is a telltale sign that a values statement is marketing, not leadership. What happens to the hotel if they don’t protect the environment? Literally nothing.

Everyone is used to the vagueness and meaninglessness of “Core Values,” so for better or worse, we’re likely to continue calling them that even if we don’t know what they mean. But I wish we didn’t. I wish we were more explicit.

My childrens’ school has three Expectations posted on the wall. They’re really great—they’re Good Values. They’re specific, clear, enforced, and frequently referenced. It’s way better than most companies’ core “values,” and in fact aligns completely with the values we live in my family.

It seems to me that a better name for good values is simply Expectations. Food for thought: if you were job hunting and you looked at the company’s careers page, would Core Values or Expectations speak more honestly to you?

Some folks have suggested that “Code of Conduct” is a better phrase. Maybe. I think it’s best to keep that separate, because it’s associated with events. And a Code of Conduct has expected elements such as escalation policies and points of contact, which don’t feel fit-for-purpose as a replacement for Core Values.

The following contributed to my thoughts on this topic:

This section is a collection of potentially related work by others, presented without comment or endorsement.

Historical archives are interesting and instructional. At the time of writing, the Core Values I wrote in VividCortex’s employee handbook are below.

Values are beliefs about the right way to act, and guide our decisions and culture. Our values spring from who we really are. They are non-negotiables, not nice-to-have ideals or marketing.

For the sake of clarity, I am now the CTO, and although as a founder I’m heavily influential in the company’s cultural artifacts, the new CEO officially has the final say in whether this will change. I will simply point out that my cultural awareness and understanding has changed over time, and given that and the above essay, I would probably revise at least some parts of that section of the handbook if I were still CEO.