I bought a Garmin Vivomove HR smartwatch to see if it would be a good replacement for my Nokia Steel HR. It’s a great hybrid smart watch design, but it’s buggy and I couldn’t get it working well enough, so I didn’t keep it.

I’ve been keeping my eyes on the Vivomove HR for several months. I didn’t buy one right away because there weren’t many reviews, it’s moderately expensive, and there was limited availability. When it showed up in a retail store near me, I took the plunge and bought the basic black model. 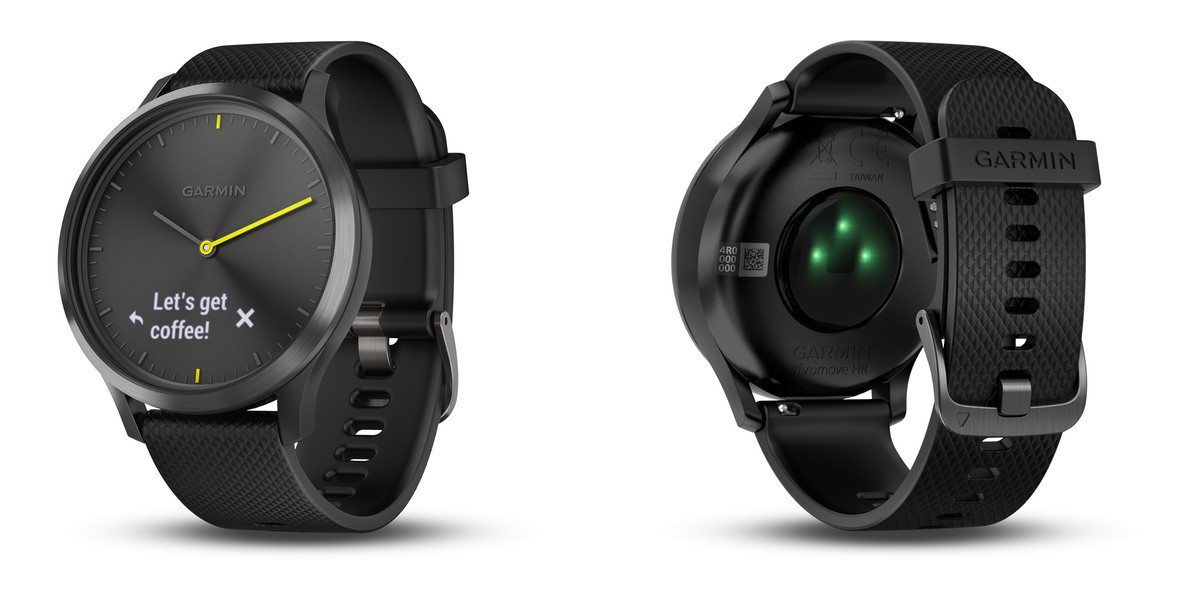 I wanted to try this watch out because of its continuous heart rate tracking, Garmin’s reputation for accuracy of biometrics, and the more complete notifications it offers versus my Nokia Steel HR.

First, the looks. It’s a traditional-looking watch with physical hands, not an LED screen, placing it into the category of a hybrid smartwatch. This is what I want; I like the look of a watch with hands that tell the time. From photos and videos I saw online, I thought I wouldn’t like the black model; I thought the design was unattractive and too basic. But after I put the watch on my wrist, I changed my mind. It’s surprisingly okay. Not gorgeous, but not ugly. My original plan was to evaluate this watch and consider whether it was worth buying the premium leather model for an extra $100. Either way, I planned to return the black one. 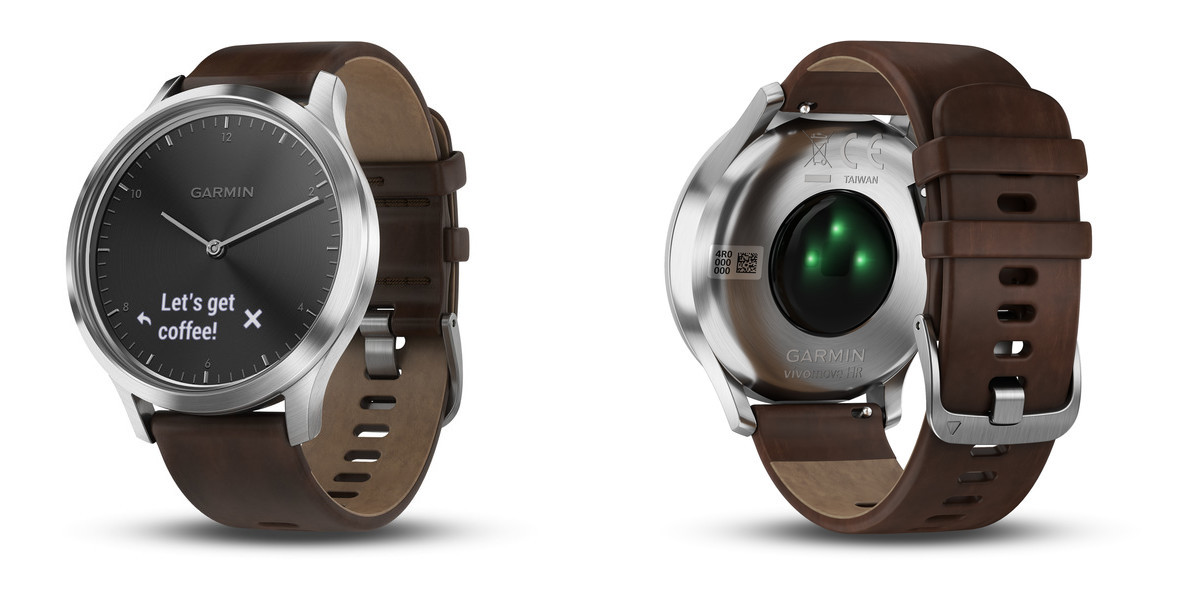 I ended up deciding that it wasn’t bad-looking; it pretty much blends in and doesn’t call attention to itself. Despite the fact that the hour hand is black on a black watch face, it’s actually easy to see. There’s no second hand, which I’d like.

The watch is solidly built but still light, and feels high-quality. It has a thin profile that sits snugly against my wrist and doesn’t catch on shirt sleeves and the like. It’s a great blend of watch, smartwatch, and fitness tracker.

The main smartwatch feature I want is full-featured notifications so I can decide whether I need to look at my phone. The Vivomove HR is very effective for this: unlike some other smart watches I’ve evaluated, you can get notifications for any app, and the notification content (for example the content of a text message) is viewable from the watch, as well as the name of the app and other information such as who sent the text message. This additional richness is very useful.

I had some trouble with notifications: I wasn’t getting notifications on my wrist for everything my iPhone notified me about. I contacted support, and they told me that on the iPhone, you have to enable “show on lock screen,” “show in history,” and “show as banners” for any notifications you want to see on the watch. This hidden incantation isn’t documented in the Garmin knowledgebase.

The fitness tracker features are great: you can disable them and make them invisible while the watch tracks your biometrics! It can track steps, stress, heart rate, and a host of other biometrics, but you can disable “goal” features, so you don’t have a watch nagging you that you need to move to reach 10000 steps. This is perfect—kudos to Garmin for getting this right. The companion smartphone app is pretty well done, too; the data is easily available and richly detailed.

I particularly like the continuous heart-rate tracking, which is much better than the intermittent tracking the Nokia Steel HR offers. And the stress tracking was especially useful; I’ve been trying to find a way to quantify my stress levels so I can adjust how I work. It was really interesting to review the stress-o-meter at the end of the day and compare it to my calendar, to see what or whom seemed more stressful.

Sleep tracking seemed noticeably more accurate than the Nokia, too. It recorded my sleep and wake times to the minute automatically, and seemed to be accurate about when I was awake or in light sleep during the night too (though it’s hard to know for sure without having someone else observe me).

The watch has an integrated touch screen to control and view its smart watch features. This is all but invisible when it’s turned off. The effect is that the watch face simply looks plain black, so the watch truly looks like a watch. I saw some reviews with complaints that when the screen is activated it’s not bright enough, but I never had trouble with that even in bright sunlight. It was always easy for me to read the display.

The downside is the battery life isn’t as long as the Nokia’s 25 days, though in practice recharging once a week and getting much richer biometric data is a good tradeoff for me. I got 6.5 days on my first full charge, and at that point there was still 10% battery remaining. I disabled some of the standard features, so perhaps that’s why I got longer than the claimed 4-5 days of battery life. It was a nice surprise.

It wasn’t all good, though. Unfortunately, the watch doesn’t really perform as designed, in a few key aspects. This was disappointing to me, because I was really looking forward to continuing to use it, and appreciating the upgrade in functionality over the Nokia Steel HR.

Here’s a few things I had issues with:

If Garmin is reading this post, I have some advice. This could be a great watch, if the following were changed:

If the watch were to work as designed, and if I bought the better-looking leather-and-silver model, I’d rate it as shown in the following chart. 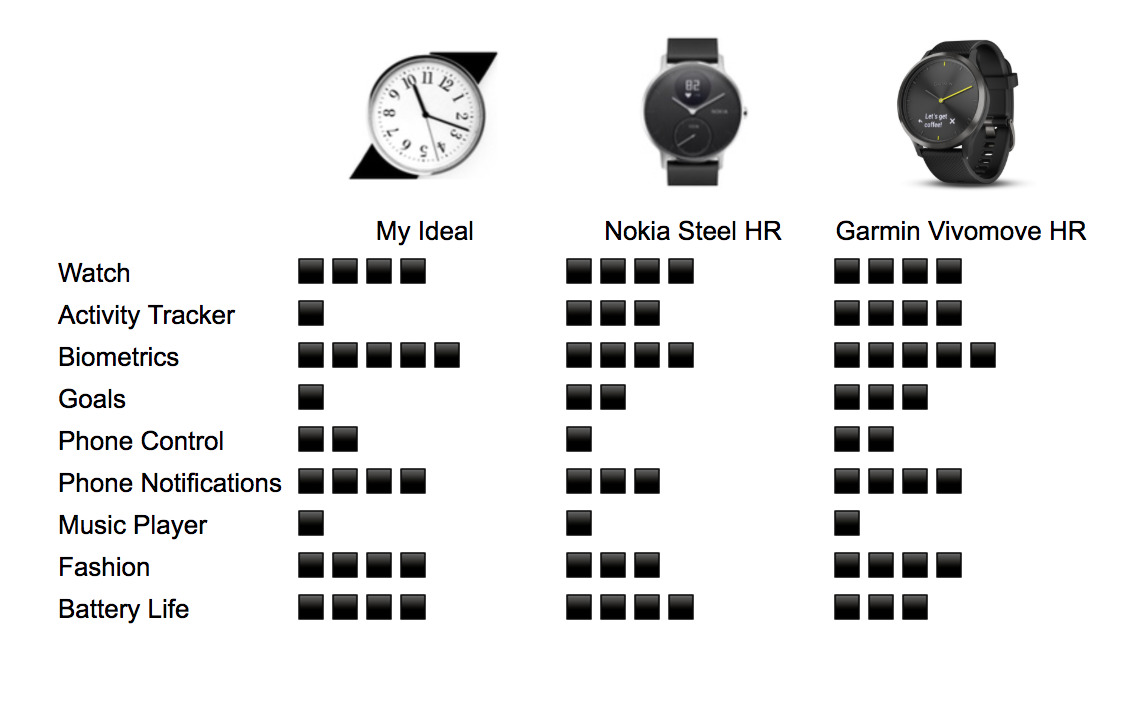