I used to use paper notebooks extensively. When I didn’t have paper and pen, I emailed myself a quick note from my iPhone. This led gradually to me keeping all of my notes on my iPhone, using the Notes app. In the last few months, I’ve moved from Notes to Evernote. This process took some time and research, which I’m sharing in case it’s useful to you.

I used to love the iPhone’s Notes app for its simplicity and speed. It had problems—sometimes links would appear where they didn’t belong, and sync was flaky—but it got better over time. And its design was just enough of the right things: the note’s title wasn’t a separate piece of data, it was simply the first line of the note; starting a line with an asterisk turned it into a bulleted list. Small touches like that made it great, but unfortunately a couple of months ago it became pretty unusable for me. The upgrade to iOS 11 and MacOS High Sierra made it so slow that it was nearly unresponsive. I was forced to search for a lightweight replacement.

I was strongly biased towards something that was little more than plaintext with a WYSIWYG interface and sync between devices. One ideal choice would be a Markdown editor that stores its data in Dropbox or similar. But I need it to work on my phone, iPad, and laptop. With that in mind, I first searched for barebones, minimalistic note-taking and research apps. One option I considered briefly was using plaintext and GitHub, and letting Git be my syncing strategy. This would be more complex across mobile devices than I was willing to contemplate, however.

I found and seriously considered the following options:

Bear Notes is a note-taking app that is essentially a thin veneer on top of Markdown. It uses iCloud for syncing content between devices. It’s not too different from the Mac/iOS Notes app in some regards, but is definitely lighter and less bloated.

I stopped using Notes, and used Bear exclusively for a few weeks, migrating notes over from the Notes app as I found I needed to update them.

I found myself liking Bear a lot. Its interface has a lovely aesthetic, and it feels pleasant and unobtrusive to use. Its search works very well, and it doesn’t have a lot of features, so it is very simple to use. It has a web browser plugin to help clip web content into notes, which I do a lot.

I liked that it uses Markdown under the hood, although by default it uses a variant on Markdown and has to be configured to use standard Markdown. In fact, the Markdown is only about half-hidden; it feels like only a slight step up from writing Markdown with good syntax highlighting.

That turned out to be one of its flaws, to tell the truth. Some things about it bothered me a lot, especially some of the design and typography choices. For example, headings and bulleted lists didn’t indent as I’m accustomed. They outdent the formatting symbols past the left margin of the text, which makes it feel like the formatting is distracting from the content. When I create a bulleted list, I really want the list to be set off with indentation to help emphasize the cohesiveness of the list in contrast to the surrounding content.

Here’s a couple of screenshots to help illustrate. First, here’s the Bear interface without any notes, to show how simple it is. 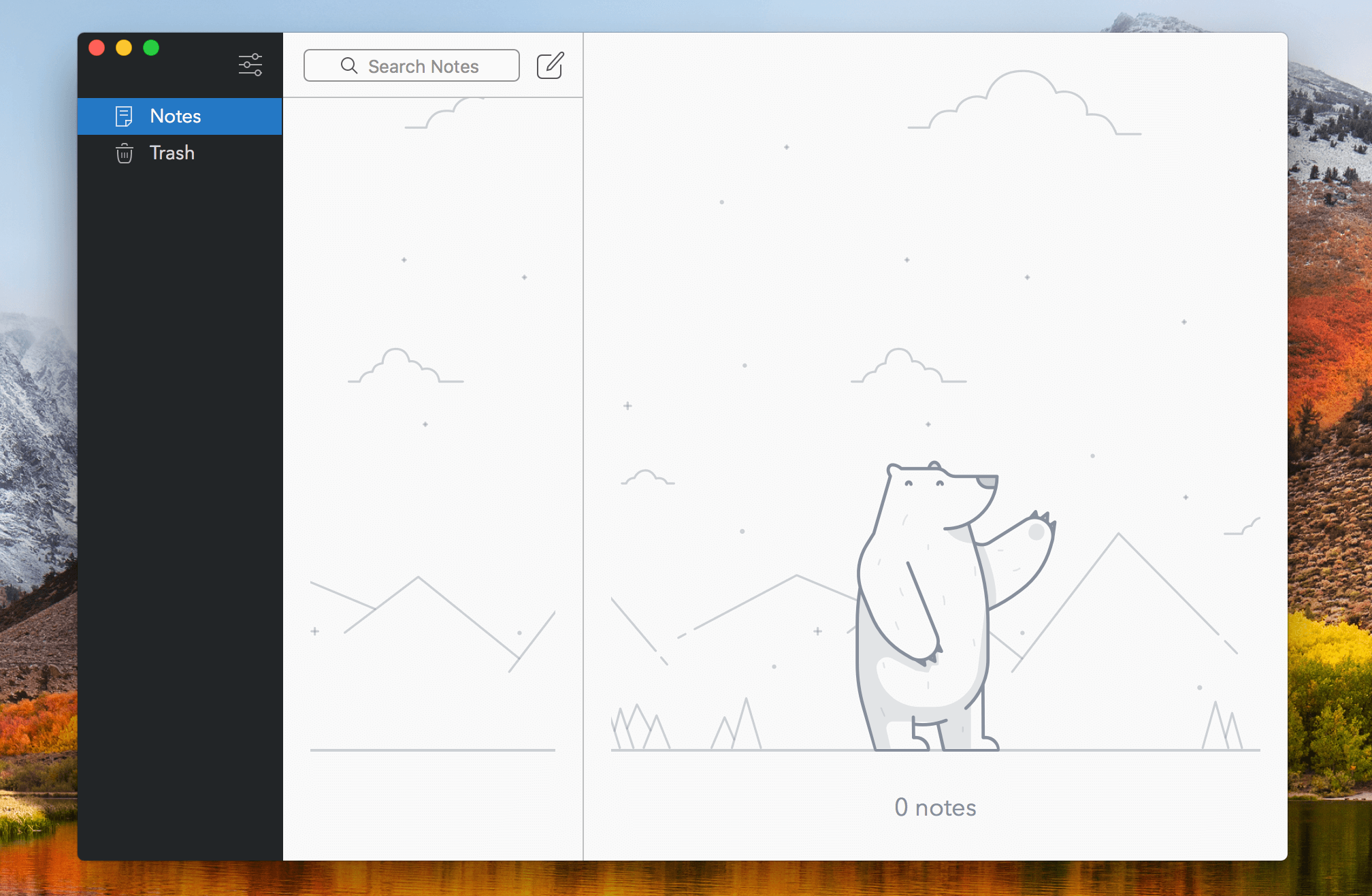 The simplicity you feel in that screenshot is borne out in the user experience in the app. Here’s what it looks like with a simple note and some common formatting options I use: 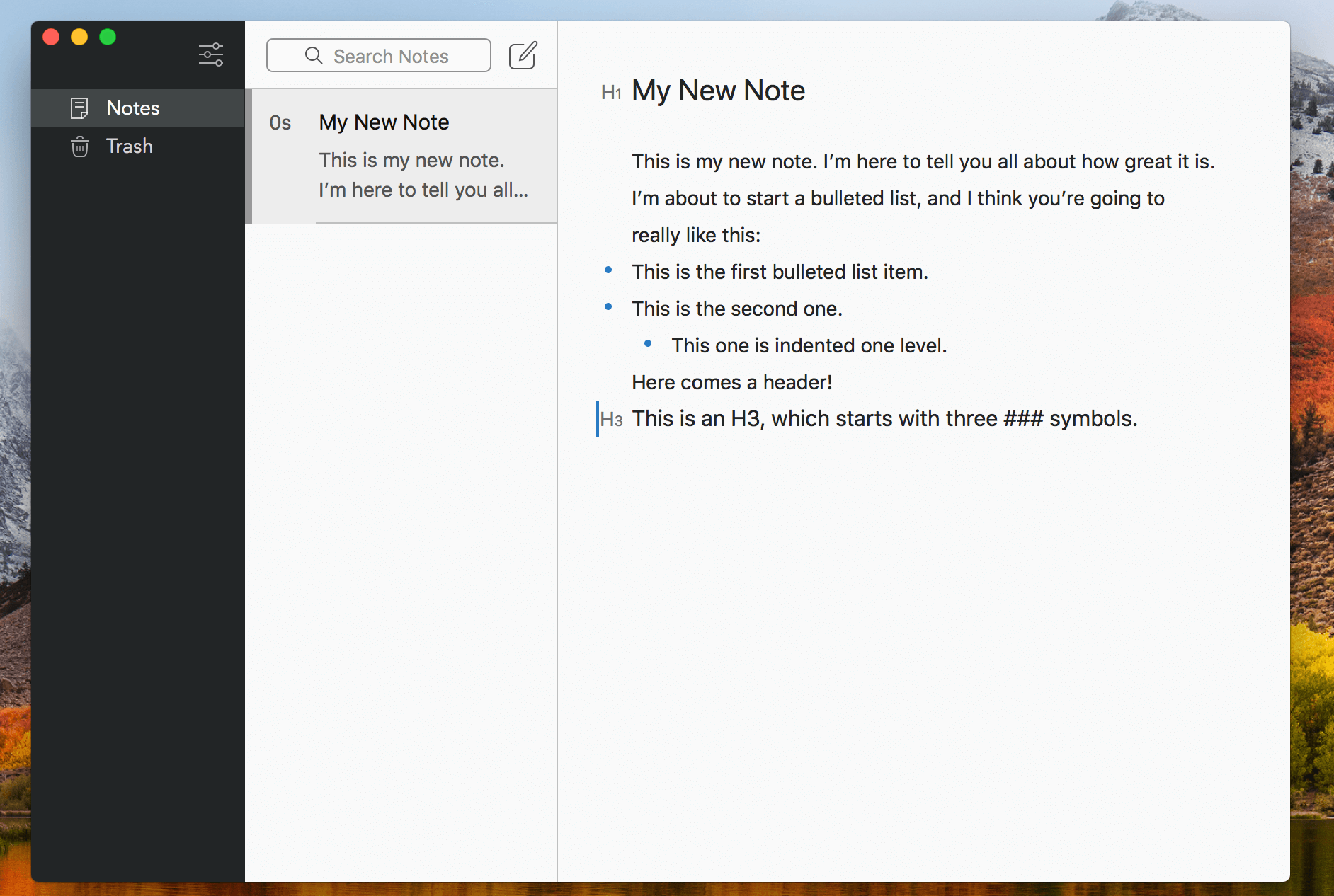 Notice how the list isn’t indented, and the bullets are outdented? Notice how the cursor is off the left edge of the document in the heading? Little things like that add surprising cognitive load to using the app.

Here’s an example of a task I do a lot: I put my cursor at the end of a line and hit Cmd-Shift-Left to select the text to the beginning. In Bear, this copies more than the text, it copies the formatting too. It surprised me every time I did it, and never stopped being surprising and slightly jarring. Another example is the extra space between the title and first line, which you can’t put the cursor into. It feels like groping for something in the dark.

The app’s copy/paste behavior is actually one of the biggest issues I had with it. Although it looks like it’s formatted text, it isn’t: when you copy and paste into another app, all you get is plaintext with asterisks and other formatting codes. I copy and paste between apps a lot, and I want things I copy from my notes into my emails to have the right formatting. In Bear, I’d have to export the content to get it into HTML, open that in a browser, and then copy from the browser. I know copy/paste is probably messy under the hood, but the experience with Bear was jarring compared to other apps I’ve used.

Finally, syncing was frustrating. There’s no support for conflict resolution. If I edit a note on two devices offline and then bring them online, I get two notes with conflicts, and now I have to resolve the differences between them. Most other note-taking apps I’ve used have figured out how to merge updates. Even if there ends up being some amount of conflict or messiness in the text, that’s a lot better than having two notes with slight differences I need to resolve. Bear isn’t up to par here.

In the end, I gave Bear a few weeks and then canceled my subscription. The less-is-more aesthetic of the app was appealing, but it felt like I was coming up short on some features I needed to work better, and I had problems that felt similar in complexity and effort to more complex note-taking apps, which kind of negated the point. It looked like I was going to have to use something a bit less minimalistic.

I turned my attention towards more fully-featured products like Evernote. After giving up on minimalist Markdown-with-a-GUI, I was willing to introduce other variables into the mix. It’d be great to have the following:

I investigated a few and discarded them:

I had a prejudice against Evernote: I thought of it as bloated, complex, slow, and buggy. But my wonderful wife has been using it for a while, and she was happy with it, so I took another look and found I was mostly wrong.

First of all, it does satisfy my wishlist: I can use it as a Pocket replacement, I can store my whole digital note-taking and information-hoarding life into it, and it has a browser extension and article simplifier that’s better than Pocket’s. And it’s platform-independent and is unlikely to go out of business in my opinion.

When I tried it out, I was pleasantly surprised. It’s not bloated or slow; quite the opposite. It’s much faster and easier to use than Notes. It does have almost every conceivable feature and interface option, but they are designed well so they’re not intrusive, and the user experience feels clean and pleasant.

Sync worked a lot better than I’d been prepared for, too. I’ve had an issue with a note that wouldn’t sync, and the user interface errors were confusing, but when I looked into the activity log I found it was an unreachable URL in that note. Why this was preventing it from syncing I’m not sure, but fixing the URL fixed the sync problems.

I converted all of my Notes notes into it after a few weeks, and have been happily using it (and a Premium subscriber) for a couple of months. Overall, it’s a great experience. Here are the only bad experiences I’ve had:

Careful readers will have observed that I seem to be holding Evernote and Bear Notes to different standards of excellence. Why was it frustrating for Bear Notes not to resolve sync conflicts, but acceptable for Evernote? I’m honestly not sure; there’s bound to be some psychological effects at work here, some kind of bias. I’m valuing things differently, I recognize that. It may be that Bear Notes has a different feeling and aesthetic, and that sets a different standard for what feels frustrating to me.

Importing from Notes to Evernote

After importing a couple of notes into Evernote with copy/paste, I found a script online to automate the process instead. Perhaps you already know this, but Apple’s user interface is highly scriptable, which is great. It’s like UNIX for the GUI. The following script imported all the remaining notes I had in the Notes app, which was several hundred: